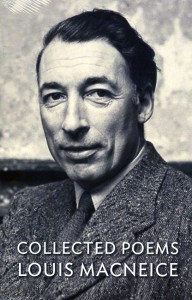 Louis MacNeice was an early 20th century poet who was well-known in his time but is lightly read today in the U.S. David Orr makes the case for an adaptation in this perception. 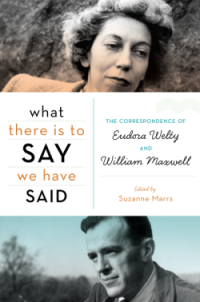 What There is to Say We Have Said (Ed. by Suzanne Marrs)

When was the last time you spent an entire day writing a letter? Suzanne Marrs has edited a collection of letters by two writers for whom this must have been a regular occurrence.

In an unrelated essay on photography, A.O. Scott wrote that “. . .while the literary canon has made room for a handful of diaries, letters and newspaper articles, these exceptions tend to reinforce the exclusion of vernacular forms from the pantheon of art (NYT Magazine 6 May 2011). A collection of letters between Eudora Welty and William Keepers Maxwell, Jr. (with an occasional letter from Maxwell’s artist wife, Emily Gilman Noyes) has been curated by Suzanne Marrs. While the collection on the whole belongs firmly in the aforementioned vernacular, to fellow swimmers in that drought-stricken pond known as the literary world, the collection offers a unique dialog between two able practitioners.  Editor Marrs reprises James Watson’s belief that such letters fit in the space between art and life, and this collection reaffirms that conclusion.

What is most remarkable about the dialog is not extraordinary prose, though there is some of that, and not the events in their separate lives, which spanned two long-lived and productive careers. Rather it’s the civility, the steadfast tone of mutual encouragement and affection.  When William signs off with “Devotedly” (26 December 1960), it strikes the reader as precise and faithful to the nature of the correspondence read up to that point in the collection.

As a 2011 release, the book will work better as an eBook than the advance proof print received for review. The reason for this is the extensive research done by Marrs. For each chapter of the collection, there are 75 to 120 endnotes. Today’s hypertext-savvy reader is accustomed to hovering over footnotes, rather than bookmarking the relevant page of endnotes and flipping back and forth. The endnotes provided can be ordinary, but sometimes they provide essential context for literary projects, characters or contemporaneous history. Consider endnote 43 in Chapter 6:

Eudora and her brother Edward drew dialogue balloons above photographs on magazine pages and folded the pages so that the photographs could not be seen. Then they exchanged pages, wrote remarks in the balloons, and shared the results” (p. 467).

On other occasions, the endnotes recall the writers’ public appearances, such as:

Eudora first met newsman Jim Lehrer in 1984, and he quickly introduced her to his colleagues Robert MacNeil and Roger Mudd. Late in 1989, as a reporter for The MacNeil/Lehrer NewsHour on PBS, Mudd interviewed Eudora about the photographs she had taken during the Great Depression. An extensive collection of these images, titled Photographs, had just been published” (p. 476).

An eBook also permits search. As the arc of these two lives becomes clearer in succeeding chapters, a desire to revisit mentions of certain events, places, opinions and literary works arises.  Old school thumbing through previous chapters is quaint but inefficient and error prone.

Devotees of the cult of the New Yorker magazine where Maxwell worked as an editor will find much to their liking, as literary figures major and minor make their way across its stage and the magazine’s host city. As a result, the letters occasion appearances by John Updike, Bernard Malamud, Rachel Carson, William Matthews, Katherine Ann Porter, Howard Moss, Seamus Heaney, Frank O’Connor, John Cheever — well, only John Leonard would list them all in a book review. The particulars surrounding the editorial process and the publishing world of that era (Maxwell: “I didn’t like the jacket copy that Knopf sent and so rewrote it”) will also be of interest to cultists.

The letters are instructive for what they do not mention, or at least mention little. Their careers coincided with the space program, the personal computer, the Hollywood blacklist and race riots. Here and there are snippets of those events (Welty wrote “Where is the Voice Coming From” after the Medgar Evers assassination), but the sense of small pond-ness is everpresent. For this they can be forgiven, though less so Marrs’ effusive characterization of their intellect.

The book contains a few black and white photos (though none from Welty’s NYC photographic exhibition), but otherwise it lacks the compelling imagery that marked some of these letters. The letters were sometimes written on illustrated notecards, with performance notes, funeral programs and clippings included, and featured the requisite strikeouts and editorial commentary. A glimpse of some of those artifacts would have livened up the book’s inexorably linear course. (Perhaps there were issues in gaining permission.)

In a way, the collection can be seen as unintentionally didactic for today’s reading and writing habits. As editor Marrs wrote,

. . . the lack of self-absorption, the embracing of experience in all its complexity, the capacity for love, the generosity of spirit, and the ability to face loss and death — these constitute the invisible signature of Welty and Maxwell, signatures that are as powerfully present in their letters as in their fiction (p. 14).

Theirs reflected the sort of disciplined friendship that may be put at risk by the mashed-up, cut-and-pasted  interactions the Twitterverse fosters. A wistful, reflective quality in many of the letters that goes beyond literary observations like Maxwell’s “It is raining cats and dogs. How I admire the person who said that for the first time,” and Welty’s “Nothing looks more disheveled than a thoroughly rained-on redbird.” It is a quality goes beyond their small town roots and sturdy sense of themselves. They spent those days and nights writing letters for the friendship, and to keep alive articulate, specific urgings the letters both sent and received sustained. As Welty wrote in a Vietnam War era letter dated 12 June 1967:

Please forgive me backsliding into not writing. 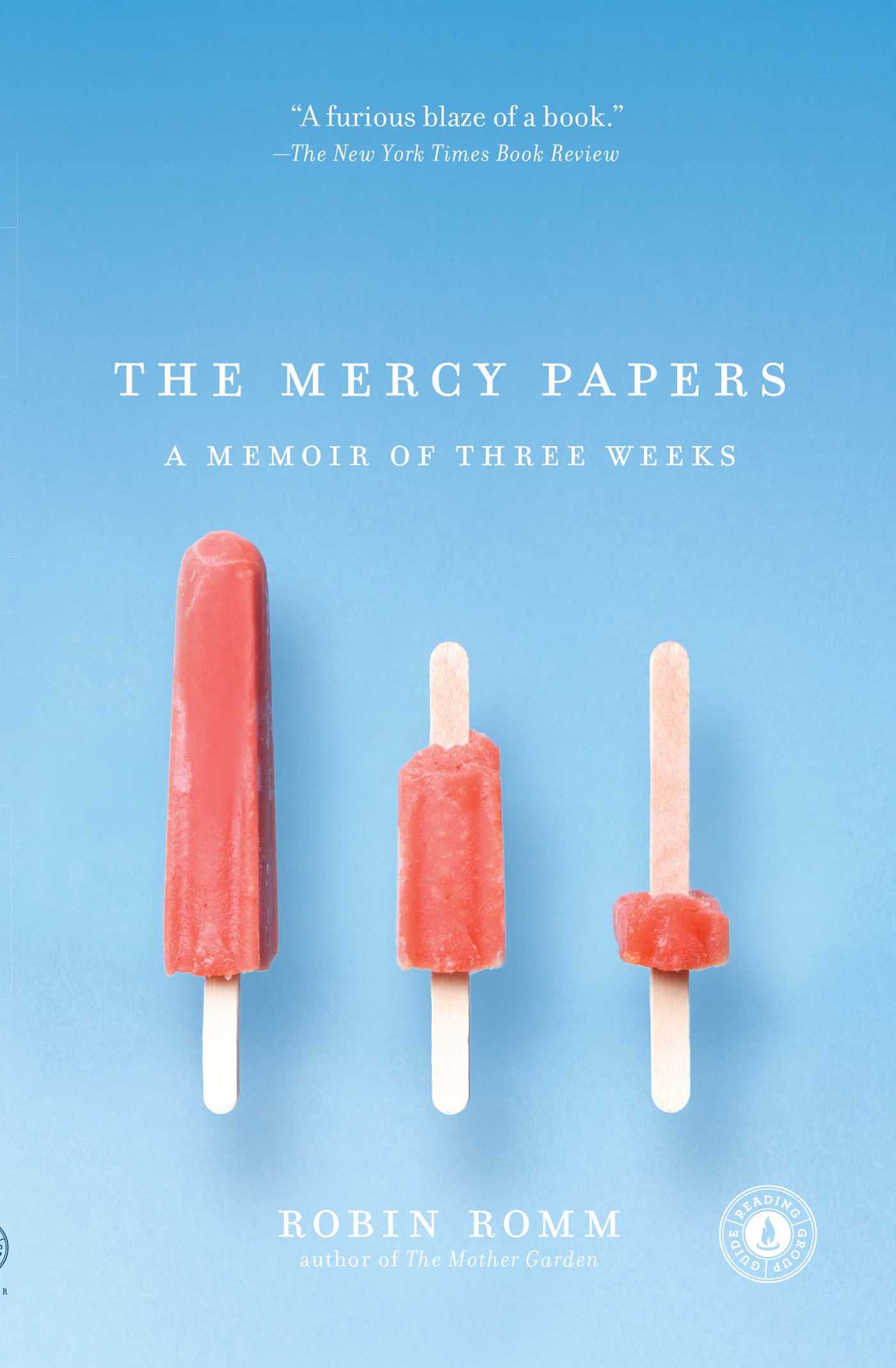 In the echo chamber of pain and tears Robin Romm @RobinRomm inhabits in The Mercy Papers (Scribner, 2009), there are other characters: father Richard, boyfriend Don and a mother, Jackie, “who was the first to notice when the crocuses bloomed each spring,” even after she had been diagnosed with metastatic breast cancer.  And other characters, too. But Ms. Romm’s shrieks are so piercing, so monstrously realistic that nearly all other voices are drowned out in this narrative.

This is as it should be.

Readers should be prepared for plainly difficult passages such as:

On very bad days, Mom will look up at me, fear and pain staining the brown in her eyes, and she will say, ” I want to go home.”

“You are home, Mom,” I say, holding her hand, which is hard as plastic from edema.

“I know, ” she says, her face pleading, “but I want to go home.”  My dad says I’m attaching meaning to this when it’s nonsense.

At other times, The Mercy Papers’ rant achieves more.  This is where Romm is at her best,  craft giving lift to the despair where nothing else could. That lift — one is reluctant to use a more demonstrative expression — is very much in need.

Legacy.com operates a hosted  for paid obituary notices for 275 national newspapers, including the New York Times (not to mention Gadzoo, a pet finder service, perhaps suited to the sensibilities of the Company) .  As fate would have it, I’ve had occasion to sponsor a legacy.com post / guest book and to visit three others since January.  A casual visit to most guest books on legacy.com confirms Romm’s perception that outside the small world of those directly affected by the loss, an abundance of platitudes and poorly reasoned sentimentalities serves to create a sense of isolation. In Papers, this plays out in many scenes. One that comes to mind comes after Jackie asks the rabbi  what happens in Judaism after people die and the rabbi offers up that “there is a great energy in the universe . . . and when you die you rejoin this great energy.”  Little wonder the sense of estrangement deepens as this memoir continues:

We could get a cup of coffee.  But who wants coffee? Who wants to see anyone in the outside world?  The outside world has gotten increasingly foreign. People smile for no reason, purchase sugary snacks, worry over leaky roofs out loud to strangers. Who needs this? No one in this house wants to talk about leaky roofs.  We want to sit quietly and be known. We want to be soothed by quiet warm hands. We want to be passive, have the world come  to us. If we are going to use our tiny reserve of energy to strike up conversation with a stranger, well, it might as well be with God.  No one else is useful. Not that God is being very useful — up there punching buttons on his death remote, smirking away.

Or, as Romm writes elsewhere, having nine years to prepare for the coming death still left her ill-prepared, and she works to convince the reader that this is as it should be.

. . . the changes won’t be hopeful — like the clarity of vision I sometimes feel when I’m in my bedroom after crying and the lines of the windows and slatted doors all look too sharp, hyper-sharp, and all people seem tragic and plain to me, easy to understand. Some of the changes will be only pain. Pain when I see babies, pain when my friends go to lunch with their mothers, pain on my birthday, on her birthday, on every birthday of every person I know.  Pain and a deep, toothy hollowness inside me that will go on grinding forever.

There’s some transference/substitution wound in the author’s psyche, as there’s far too much narration about pets. Even though the comings and goings, food ingestion and waste discharging of the beasts lends a certain authenticity to the story, this may appeal to only to inveterate animal lovers.  On the other hand, had Ms. Romm not been an only child, descriptions of siblings might have been no less meaningless.

When the reader arrives tearful and bloodied (and the blood will not all be your own) on page 194,  Ms. Romm gifts the purchaser of this volume twelve Six Feet Under-esque blank journal pages (imagine the conversations with the publishing house over this decision).

Loss doesn’t end. It goes on and on and on, written on every day that will follow.

There you have it. Twelve blank pages for notes, after 194 pages of meticulous coaching. Preparatory notes, should it not yet be your time for such loss.  Or, if your time has come, as it has for me and my mother (www.billieunderwood.com) only three months ago, then twelve blank pages just to gather up the bits of memory that loss has tried its best to obliterate.  Ultimately, there is no making sense of it, but we are each judged — perhaps by someone much like Robin Romm  — by the character of our wail.

When the wailing ends, probably through mere fatigue, prepare to be instantly teleported back to that other place you live, the one where Barb would like her CD back.