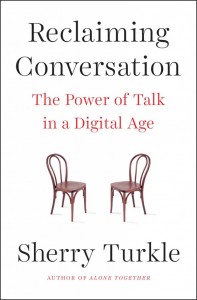 Our attachment to digital forms of communication, especially smart phones, may be responsible for the emergence of symptoms that are strikingly similar to other affective disorders.

To call it a Digitally Induced Affective Disorder (DIAD) is exaggeration, but not a casual one,  certainly not enough to keep this title from the top of a nonfiction must-read book list for 2015. True, it’s not a parallel directly drawn by Sherry Turkle in Reclaiming Conversation (Penguin, 2015), a book that the Harvard Bookstore chose to feature in its “holiday hundred” — one of eight in the science and technology category.

But take a closer look at the symptoms she associates with the decline of nuanced conversation. The clinical similarities between DIAD and other affective disorders become striking.

Ms. Turkle’s central observations about DIAD should be alarming, and not only to practitioners in the humanities.

A few of those observations:

The Failed Promise of Pro-Conversation Technology

Turkle’s book is part interview anecdote, part academic citation — but mainly first person essay. (A flaw perhaps, but in the Malcolm Gladwell tradition of such flaws).  Some of those interviewed insist that technology serves them well, despite the DIAD overtones.

Consider these quotes and paraphrases from some of those interviewed:

“My iPhone world is my Zen. You flip between your music, your news, your entertainment, your people. You control it. You own it. That’s my zone.”

“With my friends, it’s either no conversation or conversation about what’s going on, on your phone.” But it’s not talking on the phone — not live conversation. That is “the absolute worst. . . You have to be listening and responding in real time.”

“Seven minutes is the amount of time you have to wait to see if something interesting is going to happen in a conversation.”

“Turning to ‘people on the phone’ is like turning to another friend present in the room.”

It’s increasingly clear that these perceptions cannot be traced to an unfamiliarity with how their devices work, or the data they provide. A survey of adherents to the Quantified Self movement turns up many who have excelled at data collection, but struggled at building narrative, conversation (“analytics,” in the broadest sense, though Turkle likely eschew that term). Turkle quotes Intel psychologist Margaret E. Morris working at Intel: “Feedback devices are most powerful as a starting point, not an ending point. . . To the extent that these technologies have an impact, it is because they spark conversations along the way.”

The “spark” is pretty low voltage, not enough to recharge an iPhone when changing planes in an airport.

These snippets and other more concrete evidence  in Reclaiming Conversation argue strongly that collaboration tools — email, chat, text, Facebook, Twitter, Snapchat, Whatsapp, GoToMeeting, Sharepoint, Yammer — are immature. Worse, they are failing to advance beyond what was possible before these technologies overtook organizational mindshare.

Turkle insists that the problems she identifies are not to be solved by more apps. In the narrow sense- she may be correct, but the not-apps directive is swimming upstream. Just as drones are the hoped-for solution for generations wanting to avoid ground combat operations, and diet pills preferred over less indulgent dieting, a technical “fix” will continue to have broad appeal. She writes that her “argument is not anti-technology. It’s pro-conversation.” But that proposition begs many questions. Some of those questions she addresses in the book, but hers are not technical recipes.

Performance on SAT verbal/critical reading and writing scores has declined somewhat since that sub-test was launched in 2006, but the declines are not precipitous, and the correlation between these results and the decline of conversation skills is unclear. That said, there probably is one, and one that the SAT test developers ought to consider.

Alongside Turkle’s citations from psychoanalysis and social psychology, more scholarship is needed from narratology, storytelling, discourse, memory, learning, rhetoric, developmental psychology, psycholinguistics, educational psychology — and, while Ms. Turkle might object — even research into the posthuman. Likely the needs are cross-disciplinary – to bring what has been studied elsewhere into the conveniences and capabilities of digital devices.

On the software engineering side, there’s much work to be done to improve collaboration software, and to improve how managers integrate digital communications into management practices. Turkle mentions AI, reflecting her immersion with “engineer mentality” at MIT, but in fact even simplistic AI is rarely employed in most software systems built today. What she calls our “technological affordances” are often constructed with little thought for any of the disciplines contributing to what might be termed the human factors of digital discourse.

Deeper still, while it is “DARPA-hard,” technologists must confront how people and machines must both be transformed to serve the health of both. Software must address the teaching in works like Daniel Kahneman Thinking Fast and Slow and numerous other mostly academic undertakings. There’s plenty that’s relevant there: ontology, document analysis for search, discourse memory — even the technology underlying computer games.

Not that the technology horizon is all that rosy. Just look at how little Outlook and Gmail have changed over their lifetime. Or how lamely digital documents like PowerPoint decks are integrated into GoToMeeting.

Comparisons with more intractable affective disorders are, one hopes, weak. Considering the steeper challenges faced by caretakers for other disorders, the goal of reclaiming conversation seems eminently achievable. But going so far as calling Reclaiming Conversation a “sophisticated self-help book” (Jonathan Franzen in the NYT) may not be warranted. The prescriptions here are low-dose and lightly researched. Franzen calls the tyranny of devices “capitalism in hyperdrive, injecting its logic of consumption and promotion, of monetization and efficiency, into every waking minute.”

Interviewed by Lauren Cassani Davis in the Atlantic,  cites work by Tristan Harris at Google and Gilles Philips at Constant Contact. As for the latter instance: true, Philips seems to be applying well-understood concepts from Human Computer Interaction (vigilance load, cues), but these basic concepts have been in play since the late sixties. Yet most software interfaces are still cloned, copied or drawn from pizza-fed armchair developers — not from a code of principles such as those you might expect in architecture or civil engineering. Change from that sector is likely to be slow in comparison the speed of movements like DevOps, Big Data and machine learning. 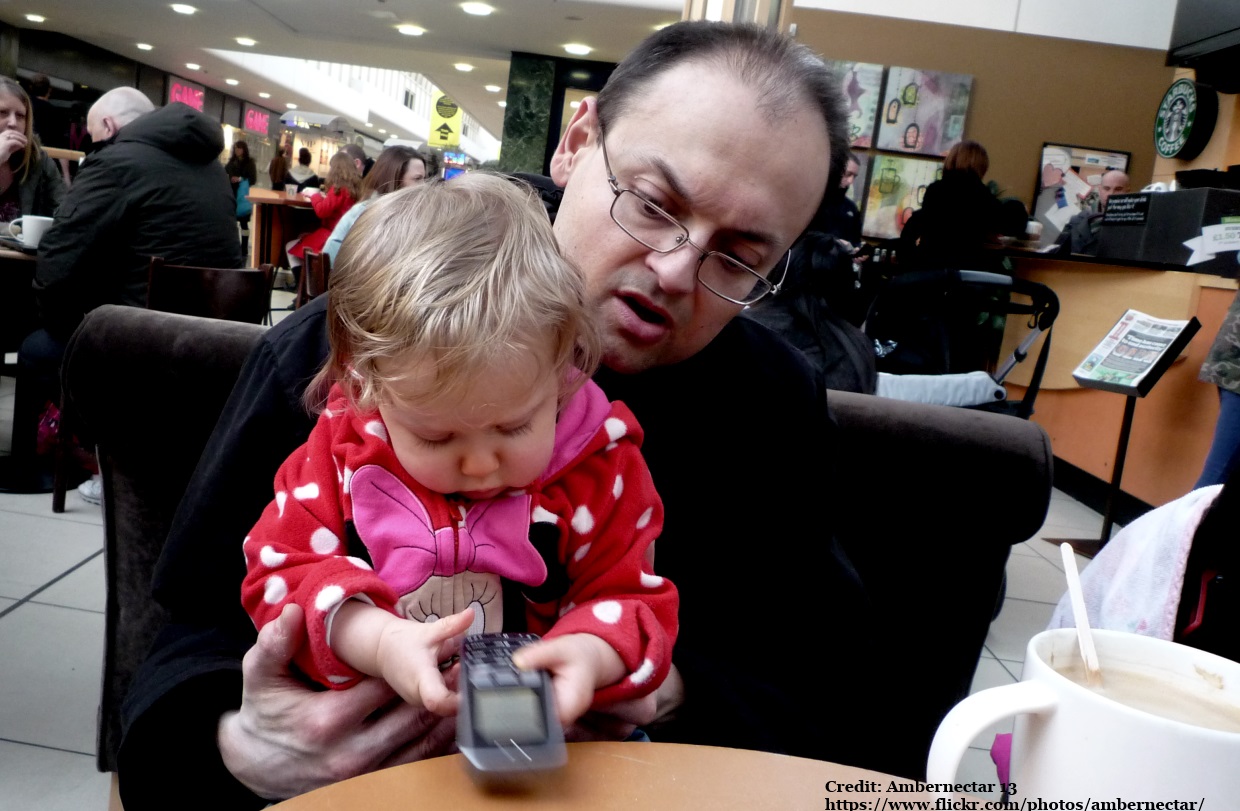 Parents feel they must equip their children with digital devices but some are increasingly aware of the risks.

On balance, Turkle is optimistic, though the book has many dark passages (such as characterizing Snapchat’s message destruction as the disappearance of self). She has prescriptions for those, as she wittily titled one chapter, “Left to Their Own Devices.”

But the central problems remain deep-rooted, intertwined with widely accepted notions of progress and happiness. If standards for quality discourse continue their steady decline, not only will we cease to ask another what we have lost; we will no longer recognize what it is we hope to reclaim.

Postscript  The Kindle version is recommended. The Reclaiming Conversation endnotes are often valuable, and some of the references will need investigating for serious readers. I’ve created 479 Kindle notes in my copy of this book.