Tomorrow and Tomorrow (Thomas Sweterlitsch, Berkeley 2014) explodes in a no-man’s land between technology’s shiny terrain and the unpredictable depth of desire.

I’m a dystopia skeptic. Not that terrible events aren’t in our future, not that we haven’t already spoiled this planet – perhaps irretrievably – and not that we aren’t moving ahead with blithe indifference. Rather it’s that the dystopias one encounters in fiction quickly veer wildly off from sensible trajectories in the direction of fantasy. The tide of implausibility (or simple disagreement about the forecasts) works against an author’s craft. One is asked to accept otherwise interesting characters in scenes painted with low budget Dunn-Edwards.

By contrast, the dystopia in Tomorrow and Tomorrow is well thought out. Walgreens is there selling THC cigarettes, the protagonist stays in a Bay area Econolodge and he attends a “PodCamp” session called “Generating a Realistic Income with WordPress and Affiliate Marketing.” Believability is enhanced by presenting a preponderance of the present along with the speculative. True, this is a dangerous game. Brands come and brands go, and non-U.S. readers may chafe at the references to unfamiliar names, but Sweterlitsch strikes a persuasive balance. His future technologies are commerce-ridden, under constant attack from malware, subject to bandwidth constraints and take into account where the increasingly wide Digital Divide will leave characters that inhabit less well-to-do urban areas. The heterogeneity of the imagined future is one of the novel’s strengths.

Tomorrow and Tomorrow’s tomorrow is not only about ecommerce superimposed on a Minority Report set with Facebook Likes, Twitter hash tags, Bit Torrent,  alerts, “augs” (augmented reality apps), drones and omnipresent Big Data pushed into virtual reality scenes rendered by neurochemically connected devices.  Its protagonist and several other characters have a literary or artistic inclination. Students of poetry will find references to William Blake, W.H. Auden, Sylvia Plath, Philip Larkin, Lawrence Ferlinghetti, Wallace Stevens and of course chapbooks. Derrida and Camille Paglia are there, too, along with a Kahlo restaurant.

Antihero Dominic is a curious mix of humanities intellectual, obsessive-compulsive, detective and facile – if not insightful – user of the technology that enervates this drama.  To some extent, it’s a crime drama with superficially clear lines of good and evil, though a closer reading blurs those lines. His story reveals a hormone-fed, misogynistic world where true crime pornography is ever-present and full-voiced — marginal but much less than today.  Coexisting with it are the usual antidotes: literalist religion and histrionic promise of salvation.

Tomorrow and Tomorrow features detailed, affectionate descriptions of Pittsburgh landmarks — the 16th St Bridge, Liberty Tunnel, 376 overpass and CMU’s Porter Hall. Those who are familiar with the city may find passages in this book deeply disturbing. But these and other contemporary references are representative anchor points in this novel, which achieves more successfully than most in its genre an intentional blurring of real and cyber life. The cyber-fusion of remembered scenes (or just sounds, smells, the sensation of clothing) with scenes constructed from VR tech was a powerful technique used often in the novel, but it pushed hard for further suspension of belief. 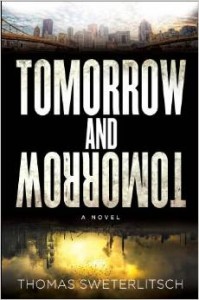 Nonetheless, the novel keeps readers wondering what’s real, what’s remembered or imagined, what’s VR, and what’s VR that’s been tampered with. It not only asks readers to examine a corruptible, if not already corrupted part of themselves, but takes graphic sexual violence to the level of a cultural force beyond the frame of a crime drama. It’s almost too powerful, at times overshadowing the love story that occupies many more pages of the novel.

In the end, I’m unsure whether Blake’s “soul of sweet delight / can never pass away” (Visions of the Daughters of Albion). The journal-keeping, long-narrative, verse-quoting heroes of this dark imagining seem passively, if not happily, ensconced on the sidelines of a future. This is a future perhaps seen as “petty” in the largesse of poetry, but is on a horizon that is anything but slow-moving.

Every literary-minded technologist should read this. Both of you.

Advance copy provided by the publisher and Amazon Vine.