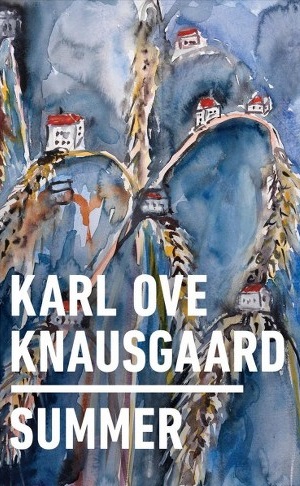 It’s a legitimate writing class exercise to ask new writers to write about the ordinary — to elevate, inspire, observe, to counter the downward pull of the overexposed and unprepossessing. Considering how much of the world fits that category (hence the label InsideTheOrdinary), most of the similes are too readily available and the easy analogies frozen into monochrome.

One is sympathetic when reading that when Karl Ove Knausgaard was working on a passage about slugs, he was distracted by reading a few book reviews of his earlier work — including one calling his earlier Spring a “poetic mummy blog.”  This thread-breaking is not dissimilar to the challenges facing readers. The rough outline of the project is both similar and different from the diarist / blogger frame. There is the occasional timestamping (which is rarely salient), as well as self-exhortation to reveal and to tease out insight from surroundings, utterances, facts.  Because this overt self-discipline is essential to writers, this is an oft-repeated theme for “thinking aloud.” It can also become routine.

But then, at times, come the enlightened passages, even when revisiting this very topic: the dictum that “literature should be personal but not private,” the “paradox that the writer has to compromise his or her personal truth, that is to create an ‘I’ with which he or she doesn’t fully identify, in order to express something that may be true for others.”

Just how much and what type of focus should be applied to his sort of intellect is where opinions may vary. A chapter on wasps becomes a treatise on anthropomorphism, written in a single, long paragraph. In one sense, how could it be otherwise? In autumn, the wasps all die save the queen, who goes into hibernation “like the sole survivor of a great catastrophe.” Slugs, dogs, mosquitoes, ladybirds, mackerel, butterflies, plums, salt and ice cream come in for similar — but different, chapter-level treatment. There are also more abstract chapter titles, “Tears” and “Repetition,” for instance, but the theme of human life seen against the broader phylogenetic canvas often recurs, as with this commentary on banana flies:

To a banana fly, life is like a duty watch. When its watch is over, someone else takes its place. What the banana flies are watching over is what once brought them across from the other side, that shadow of life which the possess and which lives on in others when they themselves are swallowed up in vinegar and return to being motes of dust.

The theme of mortality and evanescence recurs often, but it’s not the whole of Summer.  A chapter is devoted to an ill-fated bicycle ride with a son, a dialog with a daughter about a Justin Bieber song is interpreted, and when thinking about Sting’s music, that it had become “a force of defense,” and allowed him to “shut myself up within my emotions, shut myself up within the light, and if music was a key, then I had used it to lock the door, not to open it.  A shield of elation, that is as good a description as any of the manic state.”

In part, the entertainment within Summer is the juxtaposition of the ordinary, sometimes prosaically mapped, with erudition and patience. The erudition will deter some, and fascinate others who will be put off by the recitations of ordinary. Be prepared to encounter Swedenborg, Charlie Chaplin, Homer, Charles the Twelfth, Ovid.

Still, while he writes that “one of the tasks of literature [is] to remind us of our insignificance and make us understand that our own way of producing meaning is merely one of the many possible in the world, along with that of the forest, the plains, the mountains . . . ” — there is a melancholy, fearful tone which is never fully submerged. Summer, like the season it marks, is as much about the heat of dissipation and as it is of lawn sprinklers and cherry trees that push back with a stubborn, if not irresistible delight. Summer is less about writing than about attention. As Knausgaard says to one of his children,

In about six hours you will wake up, cheerful and contented, ready for a new day in which nothing of what awaits you will surprise you.

A pre-release copy of Summer was provided by Penguin Press via Amazon Vine.