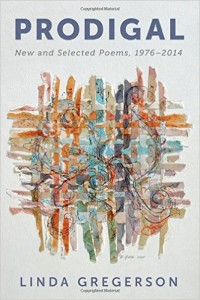 In “Good News,” attention is the prize:

story that washes us clean.

of history, of doubt. God’s

they swore, the old ones,

the believers, as now we swear by sex or shit,

which failures of attention made.

The final line lands with a finality made more dramatic by the unanticipated breaks before it.

Much of the poetry collected employs the couplet or the tercet, which Gregerson used often in earlier work. As she explained to an MIT forum:

This tercet helped me because of its asymmetry. There’s a pivot line in the middle. It gave me a resistance grid through which the syntax could move. I write into this stanza form, and for me that was absolutely essential. The stanza told me where to go. But after two books, I had to leave it because I knew the outcome too well. I had to leave it–sever myself from what had become a kind of life support.

At times,she sticks to form where others might not.  In the aforementioned “Good News,” she created the line “. . .radiant flow of video conversion,” but ends the first with a hyphenated “con-” from “conversion.” In the poem “Salt,” she breaks the clause “giddy with the earth’s / sweet pull” at “earth’s.”

But Karen would swing toward the fragrant

with laughter, giddy with the earth’s

myself, no wonder we never leave them alone,

we who have no talent for pleasure

for the body but after the fact.

In one of the strongest poems, “Her Argument for the Existence of God,” Gregerson permutes this pattern into a four-line structure. The poem weaves lay “. . . we are not talking nuance here” with biological “The cell wall whose electric charge forms now” diction to tackle the paradox of  an emergent intelligence coming to terms with horror. In this case, it’s a child murdered by an enraged man which precipitates the rant:

of the genome and

a subtle barrier no modulating thought has thought

arachnid’s exoskeleton. The kestrel’s eye. And we who might

have been worthy but

for reasons forever withheld from us aren’t. Wouldn’t you

The rest of the poem is broken outrage — or disconsolate description, depending on where readers draw the line between the “sordid corner of the morning news” and one’s “powers of foreboding”:

. . . this you have to use / your Sunday / finest to imagine, a broken back, third lumbar, which // had all / but severed the spinal cord leaving him ‘floppy’ or so / the coroner later / determined, below the waist.”

Whatever the “earth’s sweet pull,”  with flaws “as wide as we are tall” (“The Selvage”), you’d rather be damned.

Preview copy provided by the publisher through Amazon Vine.