No longer the huge fan of science fiction I once was – at least in its traditional forms – and completely uneducated about the “YA” genre, I worried about giving this book a fair treatment. Add to that, the Random House web site classifies this book as “Juvenile Fiction – Girls & Women.”  Luckily, chick flicks generally appeal to me (e.g., “Paradise” or “Le Grand Chemin”), so I braved the waters. Easing this plunge was its setting in the NYC greater metro area, including scenes set at nearby Jones Beach and the Meadowbrook Parkway. 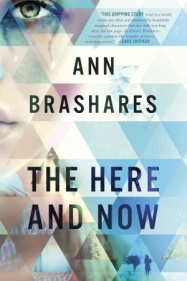 The Here and Now by Ann Brashares

The clever title embraces a common poetic trope (living in the moment, for you neophyte Buddhists), and happily, the plot of The Here and Now had enough momentum and who’s who mystery to keep my attention through the pothole-filled roadbed of teen dialog.

Here is the flavor of the latter. Preena is the book’s teen heroine:

His eyes are serious on mine. “Listen, Prenna. Do you know how long I’ve loved you? Being with you is not going to hurt me. I refuse to believe it.”

“And you know what the truth is?”

“If I could make love to you right now, I wouldn’t mind if I died.”

My eyes are teary, but I can’t help smiling. “Well, I would mind, I really would.”

But interspersed with this forgettable dialog, which usually stops just short of hackneyed, is this:

“They just scroll through these faces again and again. But most of us have a sense of the story behind each face. We understand, without saying so, the overrepresentation of the fragile, the wayward and the incompliant members of our community up there on that screen.”

The juvenile-in-transition narration, captured in passages like these, can be downright enlightened:

“I am amazed by the lushness, the generosity of it, all the things you can eat and plant and pick, the places you can swim. People here act like the great things have already been lost, but they are wrong. They have so much still to lose” (Ch. 3).

“So many mornings I’ve woken with the burden of reassimilating sadness and loss” (Ch 16).

“Lying here like this, I can imagine happiness. Not a kicky, bright kind, but a full almost aching kind, both dark and light. I can see the whole world in this way. I can imagine extending the feeling to other places and parts of the day. I can imagine holding it in my pocket like a liens, and bringing it out so that I can look through it and remember again and again the world that has this feeling in it” (Ch 14).

The Here and Now features a few packaged anomalies and anachronisms – most notably, letter-writing, which surely a more advanced society would have fully dispensed with by, say 2070 or so. The letters are accompanied by an easily anticipated Luddite commentary: “My father loved paper, even from before. . . A paper is an object. An actual thing. It can’t be modified, overwritten, updated, refreshed, hacked or anything else. It is fragile but it’s a snapshot of history . . .”

Prenna and Ethan, the two lead characters, straightforwardly appeal to readers’ weakness for the underdog and the outsider. Both characters are strange, slightly antisocial, but not so strange as to stray far from the small universe of high school; we are not spared decisions about makeup, and the appeal of Tic Tacs and bacon cheeseburgers.

The book’s time travel premise calls for a modest splashing of futurism. Accordingly, it includes “gismos” like iMemory (a record-all device) and the usual dystopian complement of viruses, rising sea levels and food shortages. These are also delivered in predictable, but not terribly heavy-handed fashion. (The novel’s blood plague of 2087 dovetailed nicely with this review’s contemporaneous New York Times story about a virus thawed from the Siberian permafrost.)

The novel’s pleasures come as the time-twisted plot line is unwound, but also as Preena’s narrator-voice rises above the ordinary.

“I look up at the glorious pink moon gazing at herself in the dark water. It makes my heart stir again. It’s not a moon to take aim at; it’s a generous moon with light enough to bathe in.”

“But the thing is, no one really believes in the future. Do they? It’s like believing in your own death. You can’t do it. Nobody can. Not even us, who have seen it all with our eyes” (Ch. 17).

As Preena notes, even a broken clock is right twice a day. So it is with The Here and Now. The discordant language and predictable scenes are present, but the novelist finds a way – here and now – to get it right. What’s right is not where the characters have traveled. It’s what they can see.

Advance complimentary copy provided by the publisher via NetGalley.