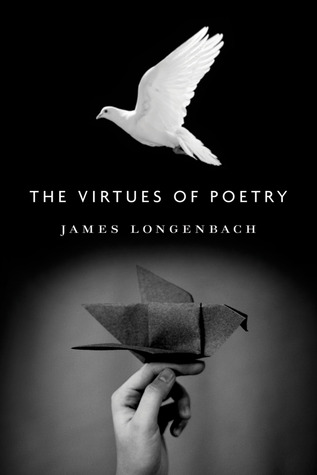 “The audience for poetry is like a vastly reduced version of the audience for college football — superstitious, gossipy and divided into factions no less fervent for having only an occasional idea of what’s going on outside their own campuses. It’s a hard crowd to write for, and the critic who sets himself up as a color commentator inevitably struggles to find a style that can please Peter without needlessly riling up Paul. James Longenbach is one of the finest scholar-critics working today, and his method for dealing with poetry’s fractious readership is simple: He just tells all parties they’re wrong.”

Commentary about poetry that can be described as “antireductionist” is worth reading if only to ascertain whether the description fits. One suspects the meaning Orr has in mind for reductionism is more lit crit than serious philosophy. 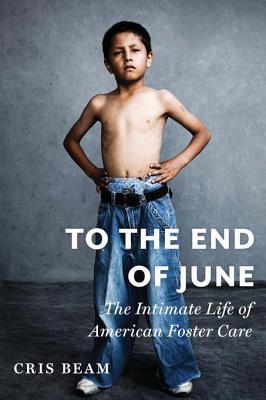 “But who defines marginality? Beam introduces us to Lei, a smart Chinese teenager whose foster mom fed her and gave her a bed to sleep on — but barely spoke to her. ‘There are so many crises in foster care . . . that basic, low-level functioning begins to seem exemplary,’ Beam writes. ‘These are the mediocre flatlands of child welfare, where if it’s not a crisis it’s not a problem.’

“To the End of June is a triumph of narrative reporting and storytelling, as well as a thorough and nuanced analysis of an American institution deeply in need of reform. It would have been hard enough to write a book focusing on just one theme, but Beam, a foster parent herself, strives for both humanity and context.”

An important topic with a depressing narrative arc that is a reminder of how much more debate surrounds the fate of a fetus than a child in our midst. 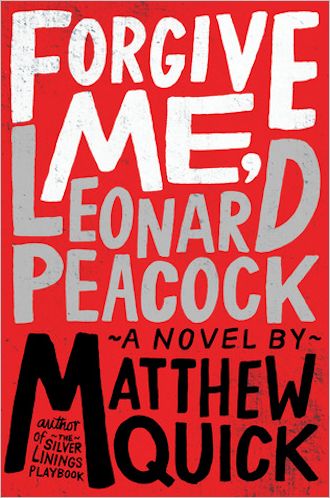 “Teenage gunmen may once have seemed a chilling aberration, but have become, hauntingly, as much a part of the American risk landscape as joy riding and misadventure at prom. Books like Quick’s are necessary, if only because novels, at their best, do what horrific headlines cannot: they reintroduce human subjectivity into large-scale national disaster. It’s one thing, after all, to write a novel from the point of view of a shooting victim, but something else to trace the mind-set of the perpetrator. When the book is intended for teenagers, the moral responsibilities of the project become steeper still.

“It is not always entirely clear that Forgive Me, Leonard Peacock has the stylistic brawn to bear its heavy load. For one thing, Quick’s narrator seems awfully jocose for a guy who’s homicidally depressed. We recognize some element of disconnected humor in the chilling work of the Columbine shooters. But would someone with a gun and a blind eye to human beauty and invention really quote admiringly from “=’Hamlet’ — he identifies with the protagonist — and offer prattling commentary on his own text in a lot of running footnotes? Would he crack jokes and make puns? Forgive Me, Leonard Peacock is supposed to have profoundly real stakes, but its creative style is fast and loose and whimsical — so far from naturalism that it feels, at times, like a particularly wanton dream.

“The key to broaching fraught subjects is precision of voice and imaginative control; the risk, in airing matters like teenage shootings for young audiences, is making the histrionics of violence look fun.”

Heller rightfully expresses a worry that the sociopathy present in the novel borders on adolescent prurience. This is the novel’s “heavy load.” 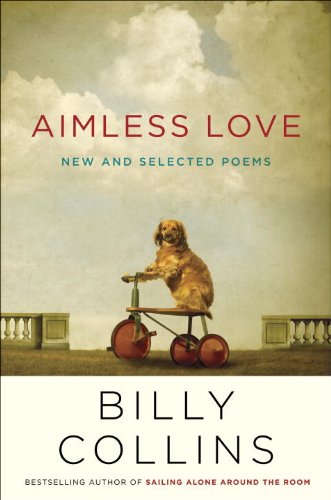 A Review of Aimless Love by Billy Collins

Billy Collins’ pen is a hammer that has been at work building a room for his poems in some pantheon or other.  Sometimes that hammer has just the right surface for the nail it wants to hit.  Other times, the nail remains unmoved.

For most people, and I count myself among them, this is OK. Collins has singlehandedly enlarged the audience for poetry by eschewing what he calls “gratuitous difficulty” in his own work and insisting on clarity above all else.  As he put it in the same interview “. . . I appointed myself the poet who’s gonna feel free to take potshots at the whole enterprise. . . If you find yourself as a writer thinking about posterity you should probably go out for a brisk walk . . . “ He is a defender of humor in poetry, which is doubtless underutilized.

Aimless Love is a collection. (In this choice of title, bear in mind that Collins advised the same interviewer that “I’m speaking to someone I’m trying to get to fall in love with me.”) In addition to new poems, Aimless Love presents work published in Nine Horses, The Trouble with Poetry, Ballistics and Horoscopes for the Dead. I mention this as a purchaser of these previous texts. There is an appreciable per-page value in this collection.

Among the new poems are some that will bring a smile, perhaps against one’s better judgment. For instance, “To My Favorite 17-Year Old High School Girl” both chides and forgives its subject, despite wistful glances at teen overachievers Schubert, Annie Oakley and Maria Callas.  In “Lesson for the Day,” Marianne Moore is flattened and left “hanging out to dry.”

There are poems that do not seem to rise above common prose, e.g., “Best Fall” and “Lucky Bastards” seem more like reminiscences. In a not-so-distant past, such efforts would have been tucked into a charming private correspondence.

Given the opinions Collins has voiced about clarity and simplicity, it is ironic that he often chooses topics that mainly appeal to writerly sorts. For instance, he frequently writes about the discipline of writing, or about other poets.  In “Dining Alone,” he refers to “Not until I would hear the echo of the front door / closing behind me could I record / in a marbled notebook.” In the fixed-verse send-up “Villanelle,” he pens the self-aware tercet “The first line will not go away / though the middle ones will disappear, / and the third, like the first, is bound to get more play.” Despite this steadfast adherence to offhandness, individual lines vacillate between plain and “poetic” diction, as in “Here and There”:

I feel nothing this morning

except the low hum of the ego

a constant, shameless sound behind the rib cage.

I even keep forgetting my friend in surgery

at this very hour.

In other words, a perfect time to write

about clouds rolling in after a week of sun

and a woman beating laundry on a rock

in front of her house overlooking the sea —

all if which I am making up —

the clouds, the house, the woman, even the laundry.

In contrast to some realist poets who pepper lines with SKUs from Walmart shelves, QwikMart signage and unparaphrased New York Times headlines, Collins uses the everyday sparingly. In this, he is, thankfully, a ruthless editor. Collins insists that readers accompany him on the everyday so that he can trick them into a gentle insight or two. His everyday, we assume, is about writing and speaking engagements and the occasional sipping of wine. So are the poems. In “American Airlines #171,” he offers up an metaphor, then gently undresses it:

life’s end just around another corner or two

yet out the morning window

the thrust of a new blossom from that bush

whose colorful name I can never remember.

Despite the humility in evidence throughout this collection, there are very successful poems present.  Closing out the “new” group is “The Names,” one of the strongest poems Collins has written. A very small taste:

Names written in the air

and stitched into the cloth of the day

A name under a photograph taped to a mailbox.

Monogram on a torn shirt,

I see you spelled out on storefront windows

And on the bright unfurled evening of this city.

I say the syllables as I turn a corner –

The proper nouns in the poem take on a lilt and sibilance. It produces just the right commemorative effect. This is an unforgettable poem.

Collins is a steady presence these days. At the time of this review, he can be heard substituting for Garrison Keillor’s regular readings in The Writer’s Almanac. At the same time, in a pantheon somewhere, a person having great trouble suppressing a smile will be reading a Collins poem aloud to a loved one.

The intention is anything but aimless.

“Shape as a preoccupation makes sense in a book about storytelling. Shapes and lines create order out of chaos, or at least highlight possible orderly paths through it. Solnit’s personal “story of sorts” brings together episodes from a difficult year in her life, one that included a breakup, a brush with her own mortality, and her mother’s descent into Alzheimer’s. . . 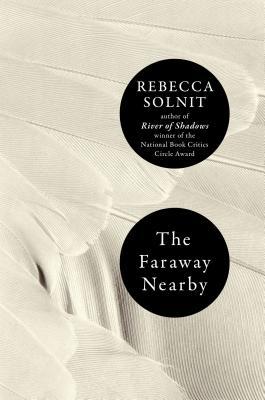 “Some of her most interesting ideas are born of wild mash-ups. In ‘The Faraway Nearby,’ for instance, after describing vanitas paintings, which portray emblems like bubbles or clocks to suggest ‘the futility of human cravings, aspirations and attachments in the face of the transience of all things,’ she leaps to the image of her breast on a mammogram: such digital X-rays are modern-day vanitas pictures, she writes, ‘reminders of your frailty and the fleetingness of all things, particularly your own flesh, a bubble sustained by breath.’” 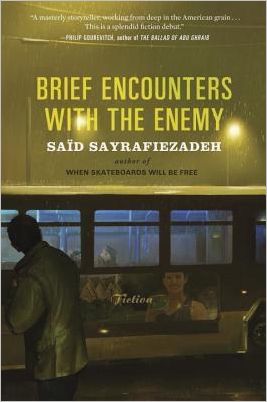 “His prose has an allegorical quality that is long on evocation and short on specifics. We have no idea why the war started, for example, or against whom it is being waged. We know only that it’s been great for business. The weather has gone haywire, though no reference is made to global climate change. The accounts assembled here read less like dispatches from America in particular, and more like the existential fables of an empire in decline.

The most striking symptom of this decline is a perverse merger of patriotism and consumerism.”