As with a few other reviewers, I wanted to like this book more than I found myself able to. Some of the reason is endemic to historical fiction. Striking a balance between purely imagined nuance (e.g., “In the crossing, Joan felt a deep dread in her bones.” – Ch 48) and historical near-fact (Joan and Thomas together in January 1344 at Windsor – Ch 33) is not easy. As this novel works its way around the problem, chapters come at the reader in a mix of longish chapters with short-story arcs, and very short chapters that are little more than scenes. Perhaps it is this aspect, more than any other single factor, that undermines a clear view of Joan of Kent herself. 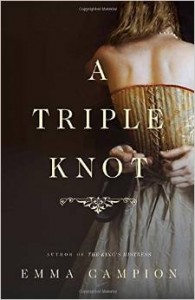 A Triple Knot by Emma Campion

What some readers look for beyond exposition that parallels the nonfiction narrative glimpsed through the fog of history is a clear sense of character. Would Joan be depicted as a woman of privilege for whom privilege was, in the novel, a filter through which she saw her world? Did her good looks change her sense of herself, her role in her families, or the sort of noblemen she found attractive? How did she handle the compromises a noblewoman must have made in this warrior-take-all machismo culture? Especially if, as Wikipedia suggests, it was an era of declining chivalry norms?

One is left with the impression of a woman buffeted by the winds of history – emotional at times, at other times just an observer of change. It’s a character held together by story threads as old as museum dress saved from the era.

A sample might offer a glimpse of this style:

“Yes, she had enjoyed that last meeting with Van Artevelde, the upstart commoner. But enough reverie. She rose from her prie-dieu in the Tower chapel, anxious to settle in the great hall before Edward arrived so that she might witness the dowager queen’s reaction to the announcement of Joan’s official betrothal. It should entertaining, as Isabella blamed William Montagu for her lover Mortimer’s capture and execution” (Ch 26).

Fans of this era, and of Nobility Intrigue generally, will be able to see beyond these limitations. The writing is not obtrusive, though it rarely soars. Plot carries the water here. Granted, a more full-bodied portrait of Joan is impossible. Yet it just that storyteller’s gift that one expects when a work edges from historical toward literary fiction.