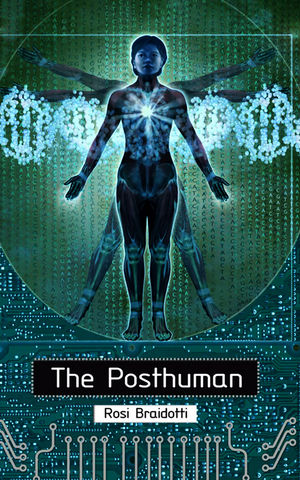 The Posthuman by Rosi Braidotti

The theme introduced in C.P. Snow’s prescient The Two Cultures (Canto Classics) was a powerful one that continues to the day. The expectation that The Posthuman would reflect this ongoing process was confirmed.

As Braidotti says early in The Posthuman:

“The crisis of the human and its posthuman fallout has dire consequences for the academic field most closely associated with it — the Humanities. In the neo-liberal social climate of most advanced democracies today, Humanistic studies have been downgraded beyond the `soft’ sciences level, to something like a finishing school for the leisurely classes. Considered more of a personal hobby than a professional research field, I believe that the Humanities are in serious danger of disappearing from the twenty-first century European university curriculum (p. 10).”

This complaint, which is largely apt in this reviewer’s judgment, is repeated often. It appears again in a largely appropriate rant against the current state of university humanities curricula:

“As the professoriate and students’ representative bodies lost their powers of governance to neo-liberal economic logic, the Humanities dispersed their foundational value to become a sort of luxury intellectual consumer good (p. 178).”

The complaint is not overstated, despite the rhetorical tone Braidotti adopts here and elsewhere. The Humanities, especially as reflected in academia, have retreated inward. That retreat sometimes plays out as Luddism, sometimes as indifference to events in the broader technology- and globalization-driven culture, and sometimes as helpless bewilderment – typically manifested as a covert replay of some historical anachronism.

Braidotti is right about this, but, despite presenting scenario after scenario of how the humanities have been marginalized, especially in academia, she comes to an optimistic conclusion that some refocusing of the university community (as Clark Kerr’s “multi-versity”) will save the day (p.184-185). How did she arrive at that conclusion in the era of professional schools, credentials-driven lifelong learning and MOOCs?

As some reviewers have mentioned, the book takes a very different direction from Ray Kurzweil’s rosy view of a science- and technology-enriched future. That by itself is not troubling, though it would been interesting to know her take on Kurzweil’s optimisim — which tries to co-opt or transform humanism into something of his own making.

More problematic is that she doesn’t mention Teilhard de Chardin’s Omega Point or Vermadsly’s noosphere, even though she introduces the concept of “techno-transcendence” (p. 113) and tries to investigate more contemporary interpretations of subjectivity. Indeed, much of The Posthuman deals with varying threads in the subjectivity ball of yarn — but most of these are themselves “humanistic.” Perhaps Braidotti would have been inspired to kick it up a notch by listening to a few episodes of WNYC’s Radiolab Radiolab: not because there’s great depth there, but because some Radiolab expose fault lines in contemporary views of the biology of consciousness, updated views of memory, the implications of genomic knowledge — and so on.

Braidotti responded to what she has experienced with analysis well worth reading, but one wishes that her experiences had been deeper and more varied — before she began the analysis.

Her reportage on what she calls the “posthuman digital universe” contains occasional references that are difficult to integrate with her version. When she mentions artist Laurie Anderson’s work in the 80’s as identifying itself as “content-providing” rather than art or intellectualism, it’s unclear that Anderson’s work achieved any kind of synthesis (p. 181-182). In other words, Anderson may have been trying to align herself with a different, new persona, but since her work — arguably — did not achieve that synthesis, Braidotti’s point is obscured.

Happily there are 15 pages of references, but, as one often finds in this sort of traditional large form essay writing, many if not most references are to books — which makes it impossible in today’s online world to rapidly check at least more recent primary sources. Readers interested in pursuing this topic in depth could have been aided by hyperlinks and more periodical references. (In searching for additional web resources, it was learned that Wiley is distributing this Polity Press book, but their web site doesn’t offer much more than the usual summary of the book.)

Despite these — Oversights? Blind spots? Irreconcilable perspectives? — the essay did not disappoint, and it belongs in every collection which has a Two Cultures shelf. (That shelf should also contain Huxley’s Literature and Science and F.S.C. Northrop’s Meeting of East and West: An Inquiry Concerning World Understanding.)

Review written for Amazon Vine.  Thanks to Amazon and the publisher for an advance copy.