Home » Alan Riding on ‘HHhH,’ a Novel by Laurent Binet 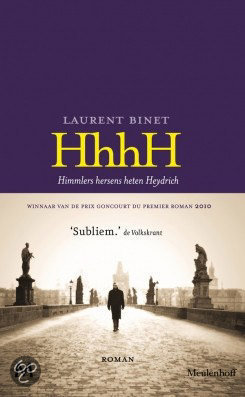 “Even as he writes, though, Binet (or the narrator) harbors doubts about his approach. He recounts a conversation between Heydrich and his father, then reprimands himself: ‘There is nothing more artificial in a historical narrative than this kind of dialogue.’ So he promises: ‘And just so there’s no confusion, all the dialogues I invent (there won’t be many) will be written like scenes from a play.’ Amid myriad other digressions, he also finds time to opine on movies and books about the Nazis — and there is no denying he has done his homework.”

The book is to be read to understand the innovation in craft that Binet attempts. As Riding notes in this review, “He need not sound apologetic. By placing himself in the story, alongside Heydrich and his assassins, the narrator challenges the traditional way historical fiction is written. We join him on his research trips to Prague; we learn his reactions to documents, books and movies; we hear him admit that he sometimes imagines what he cannot possibly know. And, in the end, his making of a historical novel brings a raw truth to an extraordinary act of resistance. This literary tour de force, now smoothly translated by Sam Taylor, earned Binet the Prix Goncourt du Premier Roman in 2010.”

Read the full review here . . .  A lengthy review of an Alan Riding book appeared in The New Republic.