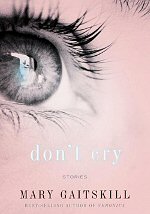 Plot, character development or scene?  Despite an overpowering temptation to cite Gaitskill’s menagerie of characters in her collection of stories (Don’t Cry, Pantheon 2009) as central to her inventions, something altogether different catches my eye.

It starts with the literary pedigree that seems to bind a number of her characters together. In “A Dream of Men,” Laura remembered a minor incident in a novel she had read by a French writer, in which a teenage boy knocked a nun off a bridge.”  “The Agonized Face” takes place at an annual literary festival in Toronto.  The protagonist speaks of making love even while the images in her head are “subtly flavored” by a novel she is to review. A composer in “Mirror Ball”  is bedeviled by ghosts “floating between him and the books he read before going to sleep.”  Dani in “Today I’m Yours” works “as an editor of a small press distinguished by its embroilment in several lawsuits,” and Ella, the narrator, spent “five dreary years” writing a book “that was like a little box with monsters inside it.”   As told by “The Little Boy’s” Bea, the line from another character “I feel so old and so worthless” came after a discussion about Mrs. Dalloway. In “Description” (doubtless ironically echoing a chapter in many a fiction-writing text), Kevin and Joseph argue about which of their classmates would be most published, and compare experiences with Janice, who ran the writing workshop. The narrator of the collection’s namesake, “Don’t Cry,” recalls that while her friend Katya was “having experiences,” she was ploddingly “putting herself through a writing program.”

It would be easy to conclude from this that Gaitskill is drawing from personal experience.  But her writing is filled with trapdoors and secret passageways. It all seems too obvious, these traces of literati and arteests earnest and not so earnest. I choose a path somewhat  different from others when throwing myself upon Gaitskill’s work.  In this framework,  characters and “Description” should be seen as props — important elements, but props nonetheless, for flourishes of wit and insight more philosophy than fiction.

A few brief excerpts may illustrate this.

“On one of those long ago assignments, I had interviewed a topless dancer, a desiccated blonde with desperate intelligence burning in her otherwise lusterless eyes. She was big on Hegel and Nietzsche, and she talked about the power of beautiful girls versus the power of men with money” (from “The Agonized Face”).

“Jennifer tried to imagine what this man’s life was like, what had lead him to where he was now.  Gray, grim pictures came half-formed to her mind: a little boy growing up in a concrete housing project with a blind face of malicious brick; the boy looking out the window, up at the night sky, kneeling before the television, mesmerized by visions of heroism, goodness and triumph.  The boy grown older sitting in a metal chair in a shadowless room of pitiless light, waiting to sign something, talk to somebody, to become someone of value, a soldier” (from “The Arms and Legs of the Lake”).

“His openness had made him wise, but it was not a wisdom he could do anything useful with” (from “Mirror Ball”).

My take on “Don’t Cry” (the collection) may be peculiar. I found the least appealing among the stories to be “College Town, 1980;”  its characters were too lifelike, their speech less elevated than in the other stories. Gaitskill’s best characters spit articulately, with a spittle that insinuates evil, or, at least a compelling dissolution. Their minds wander, sometimes struggling with the apparent senselessness of what they see, or of the curious turns taken by their own cognition. As with many writers who favor this style, expect unexpected juxtapositions of people, place and events, and the occasional shameless rhetorical theatric.  It’s all intended to jar us into glimpsing Gaitskill’s layered visions of yearning and loss.